You’re offline. This is a read only version of the page. 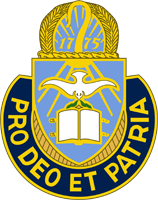 The Call of the Army Chaplain Corps

Care for the Wounded

The Four Chaplains' Medal was a decoration approved by an Act of Congress on July 14, 1960 (P.L. 86-656, 74 Stat. 521). The decoration recognizes the heroic actions of four Army Chaplains who gave their lives in the line of duty on February 3, 1943 during World War II. Also known as the Chaplain's Medal of Honor and the Chaplain's Medal for Heroism

The statute awarding the medal is listed as follows:

“Be it enacted by the Senate and House of Representatives of the United States of America in Congress assembled, that the President is authorized to award posthumously appropriate medals and certificates to Chaplain George L. Fox of Gilman, Vermont; Chaplain Alexander D. Goode of Washington, District of Columbia; Chaplain Clark V. Poling of Schenectady, New York; and Chaplain John P. Washington of Arlington, New Jersey, in recognition of the extraordinary heroism displayed by them when they sacrificed their lives in the sinking of the troop transport Dorchester in the North Atlantic in 1943 by giving up their life preservers to other men aboard such transport. The medals and certificates authorized by this Act shall be in such form and of such design as shall be prescribed by the President, and shall be awarded to such representatives of the aforementioned chaplains as the President may designate.”